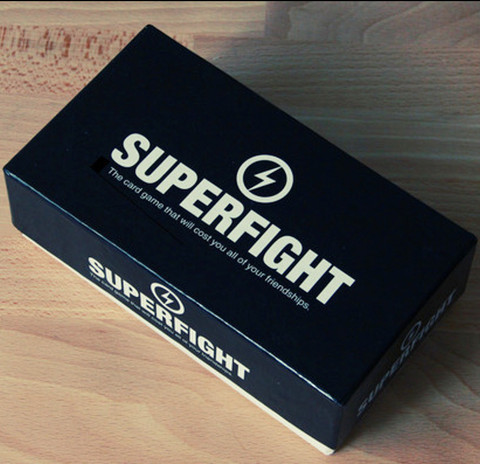 A party game of super powers and super problems.

Think Apples to Apples meets Cards Against Humanity. Then, after they meet, they fight to the death.

The game consists of two decks.

One deck contains characters, such as:

And the other deck contains powers (and weaknesses), such as:
Super Speed
Memory Resets Every 30 Seconds
30 Stories Tall
Afraid of Clouds

Each player holds three characters at all times. The powers and weaknesses stay in a deck face-down on the table.

At the beginning of each round, one player becomes The Ref. The Ref places one of his or her characters on the table as a villain, then draws and places two attribute cards next to that villain.

Each player then selects one of their characters to fight the villain on the table, then also draws two attributes to immediately place next to his or her character. These could be two powers, or two weaknesses, or one of each, or something in the middle, such as "Is Made of Cheese" (some would consider that a strength).

After all characters and their powers and/or weaknesses are in play, The Ref chooses who would beat the villain, and who would not.

It can also be played in different ways. For instance: